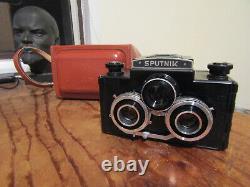 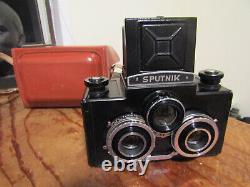 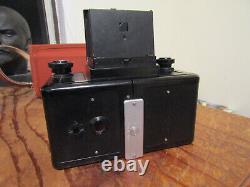 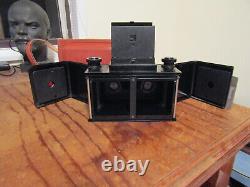 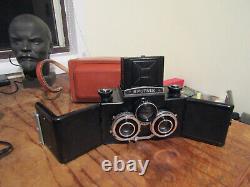 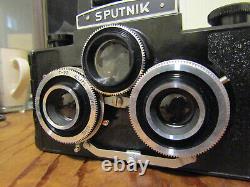 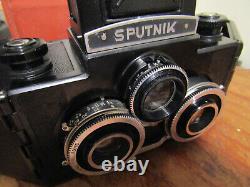 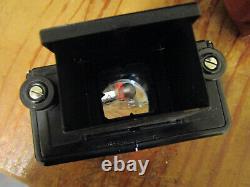 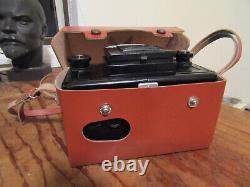 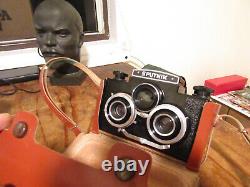 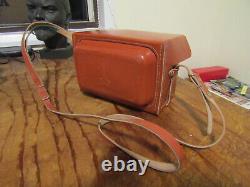 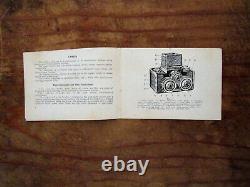 Sputnik Stereoscopic 3D Still-Photo Camera. "Loomp" Model made in the U. The Sputnik is a medium format twin-lens reflex stereo camera, introduced around 1955.

It was developed and manufactured by GOMZ in Leningrad, who later took the name LOMO. There were three successive models, of which the one on offer is a "Loomp", made by LOMO between 1962 and 1964. The Sputnik uses 120 film. Despite the name, this film format is approximately 61mm wide.

It is a still-photo format that was introduced by Kodak for thei r Brownie No. 120 film and its close relative, 220 film, survive to this day as the only medium-format films that are readily available to both professionals and amateur enthusiasts. The Sputnik camera provides six 6x6 pairs (or twelve single images). The taking lenses are 7.5cm, f/4.5 coated three-element anastigmats.

The optical viewfinder incorporates the viewfinder proper, and a ground glass representing a small circle in the middle of the field lens. A hinged lens is mounted above this. The viewing lens has an aperture ratio of 1:2.8 which is considerably higher than that of the taking lenses, therefore more suitable when focusing for sharp images. Coupled between-the-lens shutters provide automatic exposures of 1/25, 1/60, 1/30 and 1/15 of a second. A "B" setting allows long exposures of any length.

The Sputnik is made from bakelite. It was originally supplied as a set, complete with a carry-case, instruction booklet, a slide and print viewer for the stereo pairs and a printing frame, which could be used for making contact prints in a darkroom. This item is in the category "Cameras\Film Photography\Film Cameras".

The seller is "wolfvalentine" and is located in this country: AU. This item can be shipped worldwide.