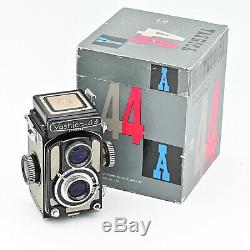 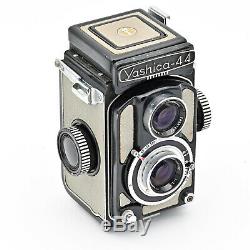 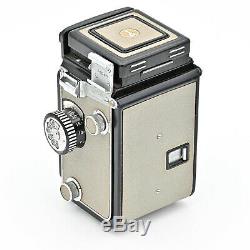 Produced in 1960 the 44A is a simplified version of the Yashica-44, using 127 roll film. It has Yashikor f/3.5 60mm taking and viewing lenses and a Copal-SV B 1/25th sec to 1/300th shutter with X flash sync. Unlike the Yashica-44 the film is advanced by a knob on the right side and the film is positioned by viewing through a window in the film door. Both the viewing and taking lenses have threaded mounts for accessories such as filters and lenshoods. Interestingly the 44A was produced in four colours; light blue, dark grey, rose, or black and all have contrasting light grey leatherette.

The nameplate for the 44A has been seen with either a letter A engraved on the top to the left of the serial number, the letters FA immediately to the left of the serial number and some late models have been seen with Yashica-44A on the front. Some have a matching leatherette insert in the centre of the viewfinder hood and some have the matching enamel finish. The 4x4cm Yashicas are being seen less frequently and finding them in excellent condition, or better as this one is, involves quite a bit of searchi. This Yashica-44A has clean, clear lenses and the shutter is working nicely.

The focus is smooth as is the operation of the waist level finder and the pop-up magnifier. Superb condition for collector or user. 127 film is still available! In Samobor, near Zagreb in Croatia, lies the efke film factory which still today produces film on original German machinery according to the original ADOX recipes.

With ADOX you capture the 50s look wonderful grey scale differentiation, edge effect, subjectively higher sharpness all those things that have been sacrificed in modern emulsions are preserved in ADOX films. The efke R100 127 has the same emulsion as the Adox CHS 100, being made in the same factory. The backing paper is not as thick as that used in 50s and 60s so for cameras with the little red window at the back make sure you close the window latch after use to prevent light passing through the backing and fogging the film (you also get the numbers on the backing paper appearing on the negative). The item "Yashica 44A Twin Lens Reflex TLR 127 4x4 Film Camera MINT IN BOX" is in sale since Monday, March 2, 2020.

This item is in the category "Cameras\Vintage Movie & Photography\Vintage Cameras\TLR Cameras". The seller is "peterpickeringaustralia" and is located in Bentley, WA.

This item can be shipped worldwide.